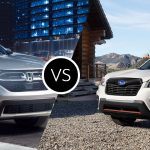 When people think of mid-size SUVs/ crossover, they generally think of the CR-V, Toyota RAV4 and some American brands. But the Subaru Forester shouldn’t be discounted as a competitor to the CR-V, as recent updates have vaulted it into a status as a legitimate contender to the CR-V’s crown as best compact SUV.

So, has the Forester improved enough to match or exceed the CR-V in the Canadian marketplace? Let’s take a look.

Starting with a straightforward numbers comparison, the CR-V boasts a 190hp turbo four cylinder while the Forester packs a 182hp power plant. While these are similar numbers, Motor Trend Canada states that the Forester is just noticeably slower both off the line and in highway passing conditions. Meanwhile, the CR-V’s engine is seen as perfectly happy around town or cruising on the highway. As for fuel economy, the Forester is rated at 9.0l/ 100km city and 7.2l/100km highway, while the CR-V is rated at 8.4l/ 100km city and 7.0l/ 100km highway. For this versatility and efficiency, we must award the CR-V winner in this category

Subarus have generally been known to possess less raw power than competitor cars but made up for it with superior ride comfort and handling, in their class. Unfortunately for the Forester, Motor Trend was severely disappointed in these attributes for the Forester. With its loose suspension, the reviewers stated that driving over rough roads was prone to induce bouts of car sickness, rather than comfort and contentment. Meanwhile, the same reviewers raved that the CR-V combined both comfort and sporty handling, essentially stealing the traditional Subaru party trick! Therefore, the winner must be the CR-V.

Motor Trend straight up called the interior of the CR-V a marvel for how it packages so much into the given space. Even with all that packed in, including multiple USBs, cupholders and cubbie holes, passenger space is enough that a 6’4” man could fit in the rear seats, while available Apple CarPlay and Android Auto just adds to the user friendliness. Edmunds states that the CR-V also has comfortably greater cargo volume than the Forester. However, the Forester has made great strides in its interior. The quality of materials is evident while the practicality is on par with the CR-V. As well, its very good infotainment system places it in the top of its class. These points allow the Forester to tie the CR-V when it comes to overall interior grades.

The Subaru Forester has very competent driver safety mechanisms in place which assist one in avoiding potential accidents. However, Motor Trend states that the Sensing Suite in the CR-V will simply prevent more accidents than the technology in any vehicle in its class. As for driver assist programs, Motor Trend states, “The CR-V’s lane centering and related systems perform more smoothly and consistently than any other in this group”. While the Forester does have very competent safety features that any driver will feel comfortable with, the CR-V is just that extra bit better and more sophisticated at helping families feel safe and secure on the road.

The Subaru Forester is a worthy competitor which has come a very long way in a few model years. Every reviewer is impressed with its overall package and it would be nearly the consensus winner in every comparison test…if the Honda CR-V didn’t exist. Mototrend’s final verdict in the group comparison stated. “No crossover provides a better overall balance than the Honda. It’s fun to drive yet still comfortable. It’s quick yet efficient. It’s affordable yet still well equipped. And it’s compact outside and spacious inside…(it) is not only the best in this segment, but its crossover appeal should also put it on the short list of anyone shopping for a new family ride of any shape or size.” Every professional reviewer is aligned in declaring the Honda CR-V as superior over the otherwise impressive Subaru Forester. But then, families who choose the CR-V already do so with this knowledge!

Check out our inventory of 2019 CR-Vs at Honda West for special deals as we clear out new 2019 models for the 2020 arrivals!